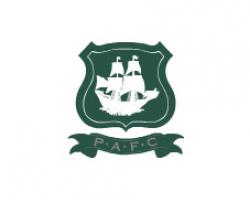 Josh Ruffels' far post lofted cross was expertly side footed back into the area by United right winger Ryan Williams and Kitson first-timed the ball home at the opposite post.Callum O'Dowda's surging run and pass teed up striker James Constable to smash in an unstoppable second from 20 yards on 63 minutes.Argyle's uphill task was made more difficult by the 49th-minute dismissal of French defender Maxine Blanchard following his second caution, for a foul on Kitson.Oxford used their man advantage well and midfielder Nicky Wroe smashed a 20-yard rising drive off the face of the cross bar.Plymouth countered with central defender Curtis Nelson's header tipped onto the bar by keeper Ryan Clarke following Andres Gurrieri's cross from the right.Target man Constable missed a golden opportunity to double his tally when put in on goal by substitute Alfie Potter only to be dispossessed by Plymouth sub Durrell Berry